Sharing your maps with GeoCommons Maker

Geocommons is coming out with a new component for their GeoCommons Suite called Maker (you may have heard a release date of Aug 18 but it looks like it will be a little later than that.. stay tuned). Essentially, the app boasts that anyone can easily become an expert map maker... and share their maps. The services developed by FortiusOne (www.fortiusone.com) have already been widely used to allow people to create and share their maps and GIS data. The following are just a few things you can see... From Olympics data and Beijing smog reports to Starbucks closing locations, IED attacks in Iraq or locations of terrorist attacks, everyone can understand a map and clearly visualize the information.

As a bit of a teaser, Sean Gorman over at FortiusOne has shared with me a sneak peek at what users will be able to create, share, and experience using Maker. The map below shows Chines Power Plant Carbon Emissions in 2007 - a very impressive map mashup! 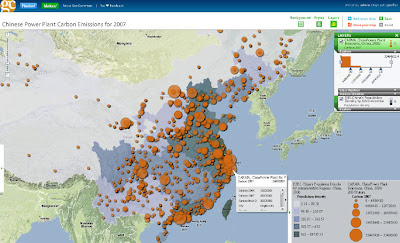 Maker doesn't just appear to be another single focus, one topic map mashup. It appears to me to take the 20% of GIS tools that are used 80% of the time and packages it into an easy to use web app. I can't wait for a public release!